Solar Water for Large Applications is Cheaper with SolarBeam Concentrator 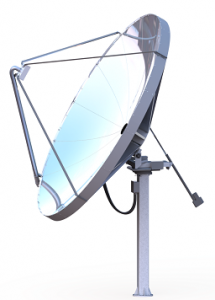 When it comes to spacing of the SolarBeams, generally you can allow 20 feet apart for installation. This is dependant on your location and the layout for the SolarBeams.

Since the SolarBeam can move away from the sun, there are no issues with overheating the hot water tanks. Some people claim that evacuated tubes can heat water to higher temperatures than flat panels or the SolarBeam can. However information about this issue is discussed in this article. Some excerpts are shown below.
http://robertkyriakides.wordpress.com/2009/02/23/which-is-better-solar-flat-panels-or-evacuated-tubes/

The temperature to which any modern solar system may be heated is restricted by a number of factors including:-
1. The ability of the heat transfer fluid, typically glycol, not to vaporise. As soon as the fluid becomes gas it is useless for heat transference. Typically modern solar systems are pressurised, so the glycol can operate in excess of 120 degrees Celsius, but not above this figure.
2. All solar systems have to be regulated to prevent over heating; this is a large potential problem. Overheating is particularly a problem for evacuated tubes as it exposes weaknesses in the materials over time and this leads to a loss of vacuum.
3. The tube may be evacuated, but the manifold that the tubes feed into is definitely not evacuated; this is insulated and suffers heat loss. So, in some ways, evacuated tubes have a distinct disadvantage compared with flat plates; they are more prone the tubes over heating than a flat panel is, but they lose the heat anyway, through the manifold.
4. All modern solar systems, whether powered through evacuated tubes or flat plate will heat water to the same temperatures. Typically in Germany the solar panels heat water to 80 degrees Celsius in smaller stores and then the potable water in blended, to prevent scalding in the home. Around 92% of domestic solar systems in Germany use flat plates, not evacuated tubes. In the United Kingdom most solar systems are regulated to heat water up to 50 to 60 degrees Celsius, depending on consumer preference and life style.

However, even though it is a small matter, evacuated tubes are more “efficient” so if you have a very small roof area on which to fit your system, you might have to use evacuated tubes. Of course there is only a limited amount of energy is a given area of light – no form of solar panel can get more energy out of the light than exists in it, so if you are restricted then you might need evacuated tubes with their smaller footprint. Generally (and it is difficult to give more than a rule of thumb) an array of evacuated tubes will probably provide around 10% more heat than an identically sized array of flat plate panels in identical conditions.

The trade off for the marginally higher “efficiency” of evacuated tubes is their unreliability. They do overheat and this leads to tube failures. If you think of an evacuated tube as a tungsten light bulb, you will understand that from time to time tubes “pop” and you need to get up on the roof to replace them. Often you will not be able to tell if a tube has lost its vacuum; in frosty weather the tube without a coating of ice is the one that has lost its vacuum.

The SolarBeam cannot overheat because it is a moving system that has 4 safety features. It is sold worldwide and has international certifications.